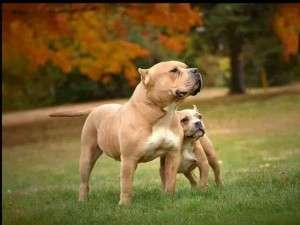 The Amstaff will do great in canine sports such as weight pulling, and Pit Bulls will do well in agility training.  In both breeds, the female dogs weigh slightly less than male dogs. Both breeds share good genetics and can live up to 15 years if well cared for.

Common diseases affecting both dog breeds include hip dysplasia, cataracts, and heart disease.  The Staffordshire Terrier is more prone to heart murmurs and thyroid issues. Grooming is effortless on both dog breeds‚ only a light brushing is needed every week or so. Both dog breeds are capable of producing five to ten puppies in a litter. 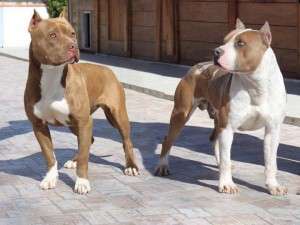 Both the Staffordshire and the Pit Bull Terrier are people friendly dogs. It is the dog owners responsibility to keep the dog as the lowest pack member in their family. As long as you follow this rule, they will get along with everyone in your household, including kids. Staffies and Pit Bull Terriers are both also very courageous dogs and will go to extreme measures to protect their human family. As an American Pit Bull Terrier owner myself, I know that these dogs are very protective of their owner’s property. These dogs have a high tolerance for pain so you will find some Pit Bulls not even bothered by electric fences. From what I observed, females in both breeds are more protective and stay closer to their owners than males.

Staffordshire Terrier vs Pit Bull | Which Dog to Get?

While deciding between the Staffordshire Terrier vs. Pit Bull, it merely comes down to personal preference. These are both excellent dogs that only know to love their human owners. Both dogs will return twice the love an attention that you show them.

Don’t be fooled by the media that says every dog who bites a human is a Pit Bull. I can vouch for the American Pitbull Terrier because I am an owner of one. My American Pit Bull Terrier is now eight years of age, and she has yet to bite a single human being or animal.

Ultimately, you, as the dog owner, help shape canine behavior. It is due to this fact it is much harder to train an adopted or abused adult Pit Bull vs. a Pit Bull puppy. With some persistence, nothing is impossible. I have seen many dogs from abused backgrounds that have made a full recovery.

Did you know that the Pit Bull Terrier served in the military during World War I and World War II?

I know of many people who love the muscle-bound look of a Staffy more, so it all comes down to personal likes. If you are into showing your dog or sports such as weight pulling, then get a Staffy. If you want a loving dog and a family companion, stick with an American Pit Bull Terrier. Both of these dogs are amazing, and please spay and neuter your dogs at a year of age to avoid unwanted pregnancies. It is heartbreaking to see that so many of these loving dogs end up in shelters. Many dogs wait a very long time for their forever homes, and if none comes forward, they are often euthanized. 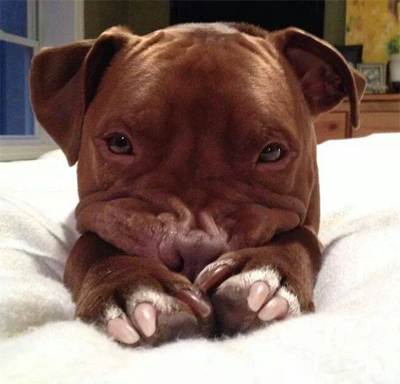 More about this author
Author 164 Posts