Mixing breeds is not as easy as making a cup of coffee and mixing in coffee, cream, and sugar. When it comes to mixing dog breeds, temperament, as well as physical attributes, should be considered to have an almost perfect mix. And one of those perfect mixes includes the Huskita which is a mixture of a Husky and an Akita. You may ask what is the reason for this mix? Well, there are several reasons one being that Akita’s have many genetic health conditions. Huskies are known to wander off from their homes while Akitas stay close to home. Huskita is the best of both breeds though same-sex aggression may still persist. In the end, you get a breed that is protective and healthy.

Where did the Huskita Come From?

Considered as one of the oldest breeds there are, Huskies are sled dogs in the working class of all breeds. Known for being energetic and majestic in posture, Huskies are covered in a long and heavy silky fur coat which can be black, red, grey, or white paired with mesmerizing blue or brown eyes. They have an elongated snout and furred curly hair. 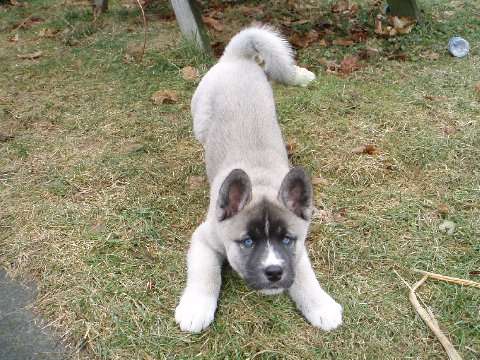 In comparison with Huskies, Akitas are part of the spitz breed but with the same long furry coat and curly tail. They manifest a dominant attitude with an air of discipline and strength. Compared to other dogs in the spitz breed, Akitas are tall and larger than most Spitz families of dogs. They look a little the same with huskies but only fluffier.

When looking at the physical attributes of both Huskies and Akitas, what’s noticeable is that there are lots of similarities between the two breeds which is why a mix between the two breeds is not that hard to imagine. Huskita’s are large dogs with a defined and solid body. Its face is outlined with a sturdy jaw structure and short snouts. Overall, the body is covered with medium length and a fluffy coat. Huskita’s are amazingly beautiful dogs though they require grooming due to shedding.

Sporting the body structure of both Huskies and Akitas, Huskita’s have a strong body and are powerful breeds. This may be because both Akitas and Huskitas come from the working breed in the first place.

What can be difficult to handle though when it comes to mixed breeds is the temperament of the pups which are the product of the said mix. This is the same way with Huskita’s. If you have very small kids it may not be the best time to get these dogs as pets as primitive aggression is still present in these breeds.

Huskita’s like Akita’s are generally loyal to a single owner which is why they are protective of them. They are perfect companions for people who live alone. If you get an Akita for your family, all members of the family must hold a higher status in the pack than the dog. They also have the tendency to be very territorial. This comes from their energetic attitude towards all things. But despite being energetic when it comes to possessiveness and being territorial, A Huskita is also relaxed in its own ways. One negative tendency though is that they can be aggressive but this could be addressed with the right training as well as the right approach.