Sharpull Terriers as the name hints are a cross between a Pit Bull Terrier and a Shar Pei. They are incredibly 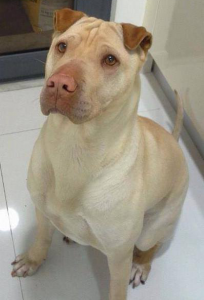 adorable mixed dogs with the good health of a Pit Bull packaged into a Shar Pei. They are so popular that they even a have a FaceBook group dedicated to them called “Sharpull Terrier“. Pit Bull dogs come in a variety of shades thus your Sharpull Terrier will have some uniqueness to them. Just like the Pit Bull, Sharpull Terriers are strong-willed and athletic. A Sharpull Terrier isn’t a recognized member of the American Kennel Club however they are a part of the International Designer Canine Registry. It’s interesting to note that humans weren’t able to breed out a Sharpull Terrier’s stubbornness as both parents have a mind of their own. Here is a little bit information on the parents and then we will have a look at the incredible Sharpull Terrier mixed breed.

You will know it’s a Shar-Pei, when you see them with a wrinkly wool like outfit which is their skin. The Chinese Shar-Pei, like American Pit Bull Terriers, are excellent family dogs. They can be wonderful watchdogs like Pit Bull Terriers however they are not meant for guarding purposes. They are protective of their owners and family but they can have a mind of their own sometimes. Shar Pei’s like to be independent but they are devoted at the same time. They have a lifespan of at least 10 years and can weigh up to 65 pounds. Did you know that the Shar Pei has a dark tongue which is desired by dog show enthusiasts?

A dog breed that has endured a lot of pain at the same time received a lot of attention from the media. The American Pit Bull Terrier is a wonderful dog breed that loves human companionship. I can’t sum up this awesome dog breed in just one paragraph which why I have written an article dedicated to Pit bull Breeds. Being an owner of a wonderful American Pit Bull Terrier myself, all I can say is you better have some energy to keep up with this breed. They are full of energy and will crave for their owner’s attention. They will also tear through most toys like its a piece of cake. If you get a pure-bred Pit Bull terrier, you will know why they were bred for game.

The Sharpull Terrier will have characteristics of both the Shar Pei and the Pit Bull Terrier. You can say they are a cuter and a chubby version of the American Pit Bull Terrier. They can weigh up to at least 60 pounds and have a lifespan of 12 years. Just like Pit Bull Terrier’s, Sharpull Terrier’s love to bark, therefore, they may not be suitable for people living in apartments. However, with the right kind of training barking can be curbed. The Shar Pei Pit Bull mix can be stubborn and requires a strong handler. They are generally not recommended for first-time dog owners. Similar to the Shar-Pei and the Pit Bull Terrier, Sharpull Terrier’s do well with positive reinforcements while training. They required very less grooming as they have short fine hair like the Pit Bull. Unfortunately, they received some of the Shar Pei’s health concerns such as the inverted eyelid problem and ear infections. You should also thoroughly clean the folds of their wrinkly skin while bathing them. They will benefit from a rub down with coconut oil as it prevents flaky and dry skin.

While obtaining your Sharpull Terrier puppy be sure to do so from a responsible breeder. I also highly encourage you to visit local shelters looking for Shar Pull terriers and puppies so that you can save a life in the process. You can find a lot of support on caring for your Shar Pei Pit bull mix from the FaceBook Group Sharpull Terrier. I hope this article gave you some insight into the Shar-Pei Pit Bull mixed breed. Be sure to join our own FaceBook group @ Purebred & Mixed Dogs. Be sure to also post comments and feedback below.

What color is your Sharpull Terrier’s tongue?